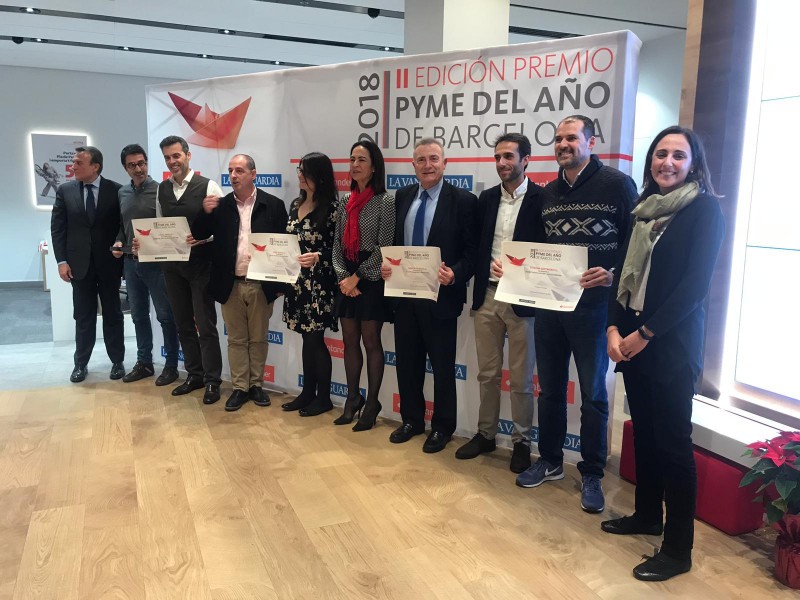 Garcia FAURA received a special prize in the PYME prize-giving ceremony, focusing on the best small and midsize businesses in the Barcelona area for 2018. The runner-up prize recognises the company’s work in the field of employment promotion.

The PYME Awards are granted by an adjudication panel of experts under the convening of the Santander Bank, the Spanish Chamber of Commerce and the Vanguardia newspaper. It is granted to companies that stand out for generating employment and wealth in their territory. The Faura family, who picked up the award at the gala held on Tuesday December 18, wanted to emphasize that the following two premises have always been the driving force behind the company: the will to create jobs and to contribute to the economic development of their city and the sector in which the company focuses its activity.

Manel Faura and Brugués Faura gave thanks for the special mention received as part of the ceremony that also distinguished the work of three other companies in the region.

Generalitat de Catalunya began in 2013 the project of a new high school for the Tarragona municipality, which will become operational this year 2016. GARCIA FAURA has collaborated on this project with the manufacture and installation of all metalwork, consists of more than a hundred windows and facade sheet coverage.

Nature Bissé, a high-end cosmetics company, is building its new corporate headquarters in Cerdanyola del Vallès, a 13,500-square-meter building that will be a research, commercialization, logistics and factory center. GARCIA FAURA will intervene with the interior enclosures and a 900 square meter curtain wall.

Palmarés Technal prize for a work of GARCIA FAURA

The jury has awarded the prize in the category Inhabiting the project H.05 TR House. A detached house designed by PMMT Forward Thinking Healthcare Architecture, built in Barcelona and for which GARCIA FAURA executed the aluminum and glass enclosures. The awards honor the joint efforts of architects and industry in the development of architectural projects in the peninsula.